The Space Traveller’s Lover – LOVE IS ALL IT TAKES

Ten thousand years ago, an alien race was driven from Earth by ancient humans. They have returned to Earth using perfect human replicas to understand and eventually control the human mind. Stronger, invincible, immortal, and with a technical superiority beyond comprehension, the aliens are fuelled by a zest for revenge while plundering Earth’s remaining resources.

The aliens have remodelled themselves into a genetically superior race and removed any feelings or emotions they consider a weakness. They don’t feel fear, guilt or remorse, and most importantly, they never fall in love.

Rothwen, a headstrong and ruthless alien soldier, develops an intense obsession with Erin, a bright young human student with a mysterious past. He decides to bring Erin into his world, changing all the invasion plans to be with her, just for his pleasure.

Once Erin is with the aliens, she discovers their immense destructive powers.

While the aliens promise the Humans that they have come peacefully, Erin suspects that not all is as it seems.

Erin’s future and that of planet Earth depend on her next actions. She often wonders where her loyalty lies. Is it with the humans or the aliens? Even though she has now been transformed into the alien’s race, her feelings and memories are still human.

Will she stay with her best friend from childhood who loves her deeply? Or will she stay with the ruthless alien soldier who shows no mercy? Will she be able to overturn the aliens’ destructive plans? 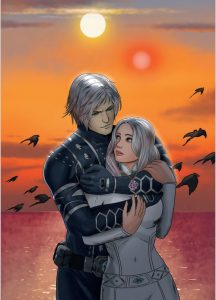 As the twin suns your life begins anew